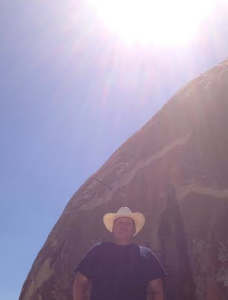 Chad C. Meek is the writer, director, and executive producer of Giant Rock The Movie. He has taken his own early childhood UFO abduction experiences and time spent with his eclectic uncle, George Van tassel (1910-1978) to bring the first of three episodes about the people who gathered at a place called Giant Rock located in California’s Mohave Desert. Mr. Meek brings over thirty years of solid experience in the natural resource industries to the Giant Rock The Movie Franchise.

Some of Mr. Meek’s accomplishments during the last 25 years as President and CEO of Clarity Resources, Inc. includes drilling six oil wells in Nevada’s Great Basin (under budget which has never been duplicated). This project’s success led to two oil well discoveries and the acquisition of over 100,000 acres of mining claims in Alaska, Nevada, and Bosnia. Contact Chad